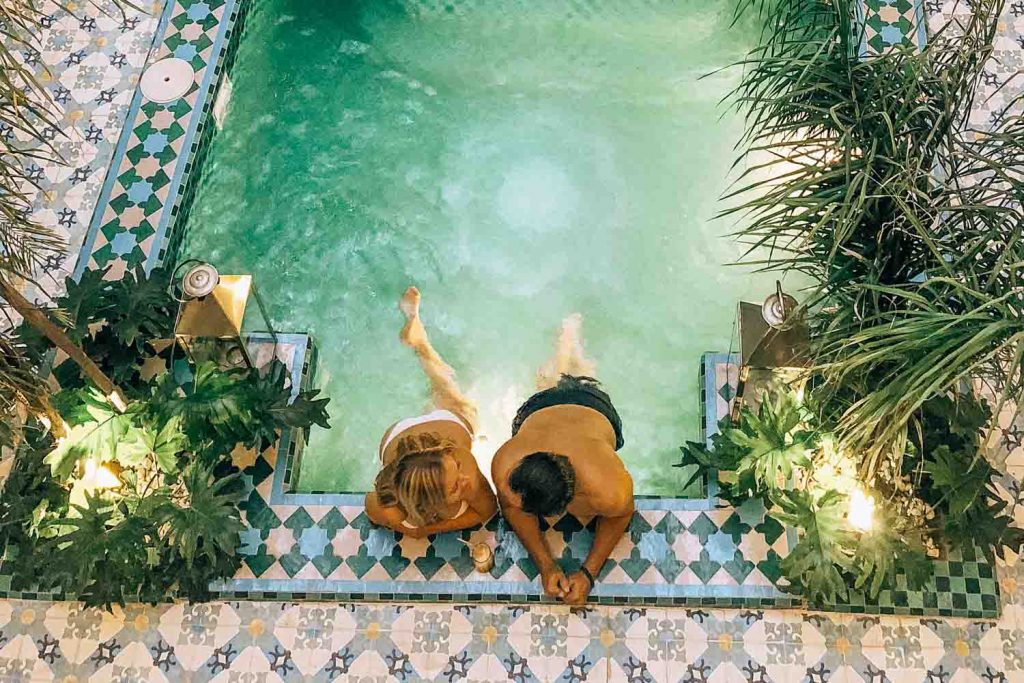 What the Aquarius Man Likes about the Pisces Woman

Her femininity. Aquarius is a logical, masculine sign. He’s magnetized by the inviting femininity that beams from the Piscean women. He loves her enveloping kindness, her gentleness, and her strong, vivid imagination.

Her innocent, vulnerable allure. Aquarian men enjoy having a partner who they can mold and protect. In Pisces, he finds a woman who appears quite incapable of looking after herself. In reality, she’s quite capable of looking after herself, but that doesn’t mean she won’t play the part and invite his support and protection. He might feel like without him, she could not possibly manage. This is an appealing dynamic for masculine signed men like Aquarius.

Her imagination. It’s quite rare that an Aquarian man meets someone with a mind that’s as expansive and imaginative as his. He finds this with Pisces, who’s Neptune rulership gives her an immersive, broad, and intuitive intelligence.

What the Aquarius Man Dislikes about the Pisces Woman

Her lack of firm and stable convictions. The Aquarian man is a Fixed sign who’s opinionated and possesses numerous strong beliefs and values. He could find Pisces to be entirely fluid and lacking in any strong opinions. He’s very logical and linear in his beliefs, and while he admires her for some of her loose ideas and spiritual inclinations, he has a hard time interfacing with her attitudes in a logical fashion.

When she gets jealous, clingy, or needy. Aquarius has big freedom needs and quickly feels restricted and drained by jealous or possessive partners. As an emotionally sensitive water sign, Pisces is certainly prone to having her clingy bouts. If she gets on a jealous streak she won’t be aggressive about it, but she’ll still likely make Aquarius feel guilty for what he considers inconsequential flirtatious moments with friends.

Her emotional sensitivity. Aquarius enjoys Pisces’s emotionality since there’s plenty of feminine allure in her soft sentiments. But her extreme sensitivity and moods can overwhelm him at times. As a uniquely rational being, Aquarius can really struggle to cope and keep up with her emotions.

What the Pisces Woman Likes about the Aquarius Man

His compassion and love of all people. Aquarius cares deeply about the plights of his fellow man and the state of the world. Pisces is very similar and her sensitivity often leads her to become overwhelmed at the state of humanity. Aquarius’s optimism and humanitarian urges inspire her. She loves how accepting he is and that he wants to help people regardless of their lot in life.

How genuine, unique, and honest he is. The Pisces woman loves that her Aquarian guy is a complete original and is always authentic Like her, he goes where his heart and mind guide him. He doesn’t lie to her or try to deceive her for power, which is something she’s vulnerable to. He may be a mysterious enigma, but he’s upfront about it. What you see is what you get with Aquarius, and she appreciates that.

What the Pisces Woman Dislikes about Aquarius Man

That it’s hard for her to connect with his emotions. Aquarius has a naturally distant and impersonal style of relating. This creates immediate friction with her Piscean emotionality. She’s a ball of emotion and isn’t wound together very tightly – emotion bleeds out of her at every turn – while Aquarius is naturally reserved in his expression and keeps his emotional nature contained.

That he’s not very romantic. Her let downs around emotion and intimacy continue with Aquarian’s “friendship” style of loving. While Pisces undoubtedly internalized all of the most prominent Disneyesque fairy-tale tropes of love early on in her youth, Aquarius did not. He treats his romantic interest more like a best buddy than a lover.

His notorious freedom-loving side. Pisces women like to latch on in partnership and immerse themselves into their partner. She’s can be a dependent lover, which suits her, as she loves the warmth and safety of a tightly-knit partnership. Aquarius is not about that life, and strives for independence at every turn – even in his most devoted friendships and romances.

The masculine-feminine polarity is strong here, but their significant differences threaten to derail what could otherwise be a  dynamic and steamy union.

The Aquarius man is likely to struggle to satisfy his Pisces woman’s complex sexual needs due to his cool-natured approach to the bedroom and life in general. He is compassionate and upbeat, which she appreciates, but he’ll likely struggle to tap into the deep and immersive sexual-emotional spaces that she craves.

Both share an interest in sex, so there’s potential there. But Pisces will likely be left chronically disappointed and sexually unsatisfied by Aquarius’s aloofness, while Aquarius will feel burdened by not being able to emotionally satisfy her.

There’s a possibility for sexual satisfaction if they can meet in the middle if Pisces can detach a little and if Aquarius learns to be more emotionally expressive.

This partnership has the potential to be quirky and wonderful, but there’s a strong likelihood that their energies will be discordant. Enough so that they’ll struggle to solidify the relationship into something that stands the test of time.

The biggest issue here comes from the dissimilar ways that they navigate life and emotion. Aquarius is logical and intellectual while Pisces is emotional and intuitive. Sure, this is a commonality that most male/female relationships encounter, but the dynamic is especially pronounced in this Zodiac pairing.

As a Mutable sign, Pisces can adapt to Aquarius’s Fixed sign nature. And she will try, to the best of her abilities. But at some point, her constant compromises are likely to leave her feeling desolate. She simply wants different things out of the relationship than he does. She wants surprises and excitement as he does, but she also requires romance and a deep emotional connection to feel satisfied, while he’s content just sharing in play, conversation, and intellectual stimulation.

Aquarius must learn to drop into his heart more than he’s accustomed to. He must make sure Pisces really feels like she’s sharing experiences with him, rather than just tagging along. While Pisces must learn to detach a bit more and release some of her more ambitious romantic expectations.

They must find a balance with their combating needs around freedom and closeness. There must be a balance struck between immersion (Pisces) and withdrawal (Aquarius). He will need to keep his attention focused on the relationship more and not drift elsewhere, as he’s usually compelled to do. Pisces will need to focus on personal hobbies and pre-occupations to cope with Aquarius’s occasional aloofness. If she neglects to channel her artistic and nurturing skills into activities outside of the relationship, she will more easily grow exasperated when he’s in a detached mode.

Aquarius must be able to pull back his usually unrestrained prying nature. He will bore into her with his mind and try to fix her. Pisces doesn’t like being looked at too closely and will find his constant prying observation unnerving.

They’ll need to balance finances. Both are a little floaty and can struggle to manage mundane such as monetary issues.