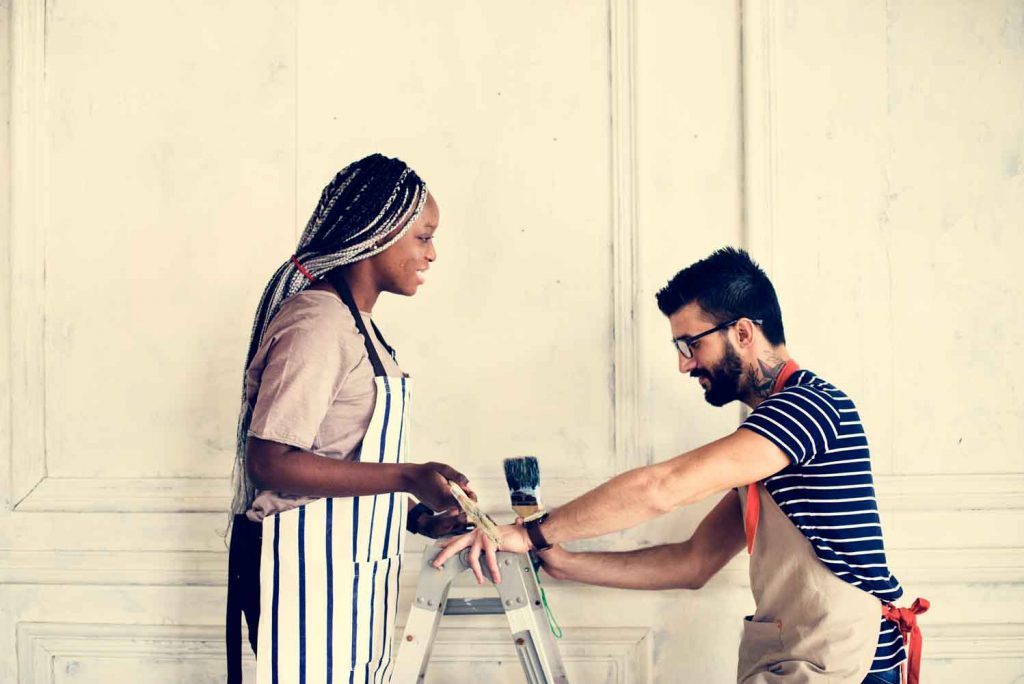 What the Aquarius Man & Woman Like about Being with Each other

Their strong mental compatibility. This relationship brings two bright minds together. People born under this sign have some of the most unique minds in the Zodiac and have a way of understanding each other that no one else is capable of. They’ll have a lot of fun chatting and will never run out of novel topics to gush over. Their mental compatibility could have been a major driving behind their initial attraction.

Their easy friendship. Friendships are very important to Aquarians, and they have a knack for creating them easily. They enjoy making friends from all walks of life. To an Aquarian, even love itself ends up feeling closer to a friendship than the standard idea of romance. If sparks develop between two friendly Aquarians, expect things to flow seamlessly from platonic friendship into more involved affections. If they escalate into a relationship, they can expect that home and life together will be shared quite easily, as they’re truly like kin together.

The huge growth potential felt between them. Aquarians are visionary and expansive. They like to grow, develop, and constantly improve. They may get stuck in their ways being Fixed signs and all, but together they can unlock tremendous potential. One Aquarian alone has enough alchemical potential to change the world. When you combine two of them together, watch out.

That neither is jealous or possessive. Few things cramp an Aquarian man or woman’s style more than a needy or possessive partner. Any constraint felt in a relationship, whether it be romantic, familial, or platonic, feels excruciating to them. They’re highly sensitive to constrictive energies in partners and will be happy to be with each other because there’s an immediate sense that neither will restrict the other.

How unique and authentic each is. Aquarians are drawn to people who are individualistic and unique. Who better to be with, then, than a fellow Aquarian who’s guaranteed to have their own spunky quirks. While same-sign relationships can grow dull because both people are too similar, Aquarians are fortunate that each one of them is like an entirely unique snowflake. They may share similar qualities, but each one is entirely unique in their interests.

Their shared love of freedom. Most partners can’t help but cramp an Aquarian’s independent style. It’s typically only Geminis, Sagittarians, and other Aquarians that are able to give them the freedom they prefer in a relationship. In this coupling, each Aquarian feels as free as a bird and doesn’t worry about being pushed into any sort of conventional relationship box.

Their shared ideological convictions. The Aquarian man and Aquarian women typically share a penchant for ideas that improve the lives of others and the world as a whole. They both believe in principles such as equality, autonomy, humanity, and diversity of views. Both are inclined towards careers that are inventive and they can do a lot together to help the collective. They’ll likely find a shared purpose together – which is important because Aquarians rarely go into a relationship simply for the sake of having one. They prefer a coupling that exists to help bring ideas larger than themselves to fulfillment.

Their shared love of companionship & community. Aquarius rules the 11th house of the collective and friendships. Both the Aquarian man and woman will likely make friends easily and have a wide social sphere. They’ll have fun intermingling their social groups and will be put at ease by how easily the other integrates into their own friend groups. They will both share ideas about how to improve their communities and will be motivated to support one another in creating that growth.

Their love of novelty, spontaneity, and new experiences. These two will always keep things exciting, as each is likely to have something interesting up their sleeves at any given moment. Neither they can’t stand idling without anything to occupy themselves, after all. They won’t feel shame about being restless because the other will understand them, and will be quick to recommend some spontaneous decisions to satisfy their restless urge.

How easy it is to build trust and get on the same page. It’s an Aquarian impulse to speak clearly, candidly, and truthfully. They have no problem trusting one another because they immediately sense that their Aquarian partner is not going to hide things. They are both complex, so there’s a lot to explore about one another, but they don’t have to worry about the other hiding themselves or manipulating the other. They both disdain manipulation and game-playing.

What the Aquarius Man & Woman Dislike about Being with Each Other

When there’s an excessive detachment between them. Aquarian men and women both struggle with emotional expressiveness. They are naturally cold and aloof to the people in their lives at times. While it’s easy for them to establish a fondness for one another, they may struggle to connect on the deep emotional levels that can help them bond more closely to one another.

When they get stubborn. Aquarian is a Fixed sign, and Fixed sign relationships tend to deal with a lot of stubbornness and gridlock. Both will be firm in their stances, which can result in some conflicts of personalities. Strong boundaries will be important to counterbalance their extreme individualities. They will have to agree to disagree at times.

When they neglect their home-life. Aquarians tend to be the opposite of homebodies. Neither is very domestic, and their home life can suffer as a result. They can get so wrapped up in spending their days and nights out adventuring and socializing that their homes fall into disarray. They also might go through introverted phases where they like their alone time, and issues can develop when they’re both introverted at home and struggle to give the other the space that they want.

Sex probably won’t be the most important aspect of their relationship. Both can easily be charmed away from the bedroom. Neither is highly sexual, as mental pursuits tend to occupy an Aquarian’s priority list more than physical forrays.

If they are suited sexually, they can have a lot of fun and interesting sexual encounters. There will be lots of expressive freedom and no taboos. They can expect innovative sexual experiences that they’ve never shared with anyone else.

They’ll likely need to work on maintaining warmth, intimacy, and consistency between the sheets if they want to avoid the real possibility of their sexual union cooling off and taking a backseat in their relationship.

Aquarians are famously known as heartbreakers. They’re independent, detached, and rarely allow enough emotional chemistry to develop in their relationships for the union to stick long-term. But when they do commit to someone, they’re loving, devoted partners.

Two Aquarians together can be an odd pairing, in both wondering and challenging ways. A positive is that they’ll feel understood and at home with each other. Each of their unique quirks will be welcomed with open arms and there will be great mutual respect felt between them.

On the challenging side, it’s unlikely to be a passionate affair. There will be great moments, especially early on, but neither is likely to be a highly romantic or emotional partner. Neither falls in love easily because they don’t like being emotionally vulnerable.

This relationship should be fun and they’ll love each other’s company, but there’s a small chance that things will escalate to a life-long union. But, we’re dealing with Aquarius, after all. So who knows!