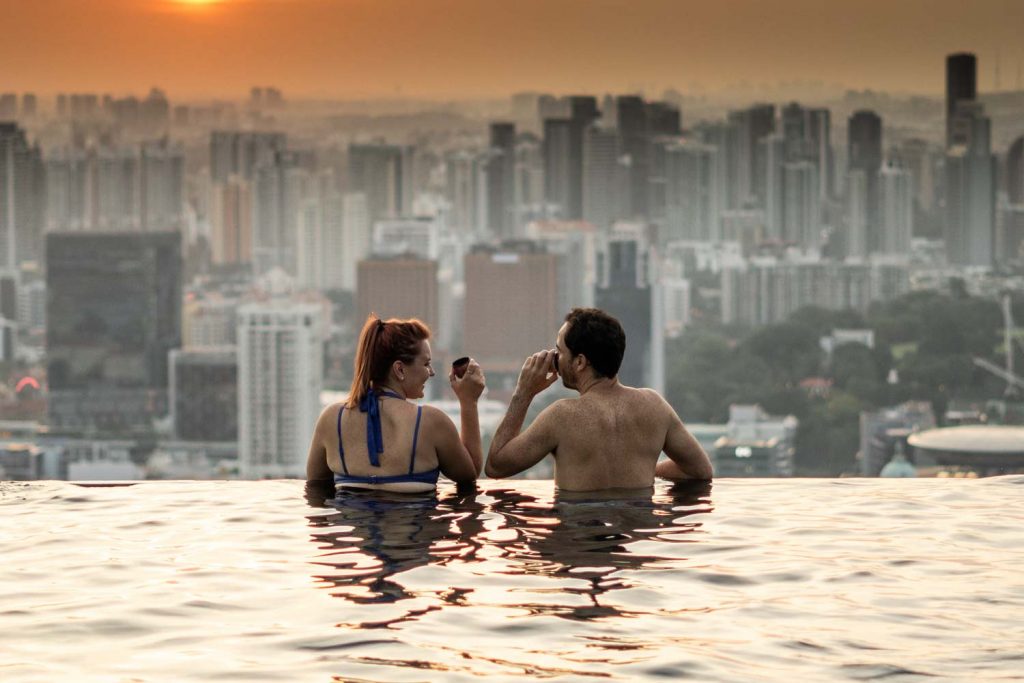 What the Aquarius Man Likes about the Scorpio Woman

Her strong personality. Scorpio women don’t want a meek guy that can’t form or promote their own ideas and opinions. She’s serious about matters of principle and wants a partner with strong convictions as well.

She’s pleased and intrigued by the Aquarius guy because he’s so unique and unabashedly himself. And he’s impressed by her.

How mysterious and enigmatic she can be. Aquarius guys love puzzles, especially when that puzzle is a person. He immediately recognizes that the Scorpio woman is deep and shields her intensity from the world. He senses Plutonic wisdom and wants to tap into her extensive reserves of wisdom.

Aquarius is immediately impressed by her sharpness, dry wit, and social perceptiveness. The way she follows her intuitive senses rather than her reason might puzzle him, but he’s certainly intrigued.

What the Aquarius Man Dislikes about the Scorpio Woman

Her intense emotionality. Scorpio women are intense – the most intense girls in the zodiac. Her tumultuous cycle of pain, trauma, and rebirth fuel her soul growth but can frighten more laid back signs like the Aquarius man, who will undoubtedly be a little spooked by her emotions at times.

Aquarius is even-keeled and believes in moderating his emotional expression. Her intensely emotional scenes can overwhelm him, leaving him feeling entirely shut off and aloof.

Her possessive and jealous side. Aquarius men like to feel free and uninhibited by restrictions. Even while dating, he will be heavily involved in friendships and his social scene.

This can trigger Scorpio’s possessiveness, as she prefers him to be exclusively hers and not want him to share energetically with other women. If she struggles to handle his outgoing and flirtatious demeanor he’ll experience her anxiety as restrictive and draining.

Her focus on materialism. Scorpios are frequently spiritually inclined but also love material acquisition. Aquarius values people over objects and could struggle to understand her constant worrying over financial matters. He gets by fine financially but Scorpio might ask more of him.

That she can be manipulative. Aquarius is typically very tolerant, but he can feel taken advantage of when Scorpio attempts to manipulate him. He’s naturally trusting and resents having to be more cautious around her.

Things could really get out of control if any sort of manipulation takes place, and unspoken tensions might tear them apart in a matter of minutes.

What the Scorpio Woman Likes about the Aquarius Man

His enigmatic ways. Scorpio is mysterious, but Aquarius is elusive and enigmatic in his own way. His mind is like an intricate maze and she won’t be able to figure him out in a moment, a day, a week, a year, or even a lifetime.

While most guys are open books, Scorpio will become fascinated by the variety of character traits and quirks that Aquarius expresses on a daily basis.

His intelligence and quick-witted conversational abilities. Both signs have tack-sharp, clever minds. Each is probing and loves a good intellectual conversation. Aquarius is sarcastic like Scorpio and can crack her up with dark and morbid humor.

His futuristic visions for humanity. Scorpio appreciates that Aquarius wants to be a pioneer and improve humanity. She recognizes his brilliance and wants to help him push his innovative ideas into the world. She can spend hours talking to him about psychology and philosophy, as his insights into people intrigue her.

His boldness and willingness to stand out. Scorpio women love daring and audacious men, and she appreciates that her Aquarius man is never afraid to stand out from the crowd and say what’s on his mind, no matter how unique his opinions are.

How honest and forthcoming he is. Aquarian men tend to be true to themselves and are willing to tell the truth to others no matter how uncomfortable or inconvenient that truth is.

He’s guarded emotionally, but not because he’s trying to conceal his emotions for power or any other nefarious reasons. Scorpio understands this and appreciates that whenever she asks him something he gives her a frank answer.

What the Scorpio Woman Dislikes about Aquarius Man

His perpetual free-spiritedness. Aquarian men are freedom-lovers who are commitment-phobic and terrified of being tied down. This doesn’t jive well with the Scorpio woman, who wants a partner who’s as intense as her about bonding and will be willing to put up with some of her possessive inclinations.

His tendency to be passive and indifferent. Aquarius has strong opinions, which Scorpio respects, but he can be detached and flippant at times when she’d wish he was more active and involved. His lack of jealousy can also make her feel ill at ease, as though his love for her is inadequate when in reality he’s just a relaxed, friend-like lover.

There may be times when Scorpio feels like she’s investing more into the relationship than she’s getting in return. But in reality, Aquarius simply expresses his affection for Scorpio in a much less overt way than she does.

His emotional restraint and lack of vulnerability. Most Aquarian guys fear their own emotional nature and possess deep fears about being vulnerable with other people. This is tough for the Scorpio woman, as she’s an intensely intimate woman who wants to love closely and deeply.

She might start to realize that Aquarius is more in love with the idea of being in love than actually opening up to the deep emotional places that he needs to in order to truly fall in love.

This relationship is likely to be a sexual mismatch. Scorpio’s sex drive is more hearty than Aquarius’s. She craves intense intimacy in a way that Aquarius struggles to provide.

As the relationship progresses, it can be commonplace for her to feel neglected and frustrated because she wants more sex than him and wants sex to be more emotional than he does. She might start nagging him and accusing him of not loving her enough.

Because Aquarius doesn’t place as much importance on sex and emotion, he’ll likely find her venting to be exhausting and irritating. He can try harder to satisfy her, but there’s a likelihood that he might not succeed, as they’re naturally prone to being a mismatch energetically.

If they do find harmony in their sexual relationship, they’ll experience good times together. They’ll find that they experience no restrictions or taboos that limit their sexual encounters. Experimentation will reign, and both will have fun.

If they can keep their sexual dynamic compelling, passionate, and permeated with emotion and mental stimulation, they can thwart expectations and thoroughly enjoy each other.

Scorpio and Aquarius are Fixed natured signs that square each other on the zodiac wheel. This is a recipe for an explosive and volatile relationship. Their dynamic is edgy, inconstant and their moods around each other can go into extremes at the drop of a hat.

Scorpio loves hard while Aquarius is more aloof in relationships. The Aquarius man’s heart doesn’t open easily, and the deep-feeling Scorpio woman might decide to move onto more fluid emotional waters with another mate before she’s able to succeed in opening her Aquarius man’s heart.

While these two are not traditionally compatible, if their charts are otherwise harmonious, their differences could make their relationship more exciting and give them a lot of opportunities to learn from one another. They’re both strong and independent characters and faithful partners. If it works, they can go far together.

They must learn to accept their differences. Aquarius and Scorpio operate on different wavelengths most of the time. Their expressions of passion, emotion, and rational thinking will differ drastically on many occasions. To succeed together, they must accept that they can’t forcibly change each other’s tendencies around sex, beliefs, and emotions.

It’s especially important for Scorpio to accept Aquarius’s freedom needs and limit jealousy as well as not demanding to know everything he’s up to.

Scorpio needs to be patient while working to deepen their heart connection. If Scorpio wants true love rather than just light fun from her Aquarian, she needs to be patient. Intimate, close, one-on-one love is far more comfortable for her than it is for Aquarius.

He struggles to drop into his feels long enough to create the close, bonded kind of connection that feels real and strong to her. There’s no getting around that this will take time, as he’s reluctant to leave his typical state of inner detachment.

They’ll want to limit stubbornness. Since these are two very headstrong fixed signs coming together, flexibility will be key. They’ll inevitably encounter frictions as square signs, and neither will want to back down in a debate or argument. This could result in the death of their relationship if they allow their egos and pride to rule every disagreement.