5 Key Things to Know about Moon Conjunct Mars in Synastry 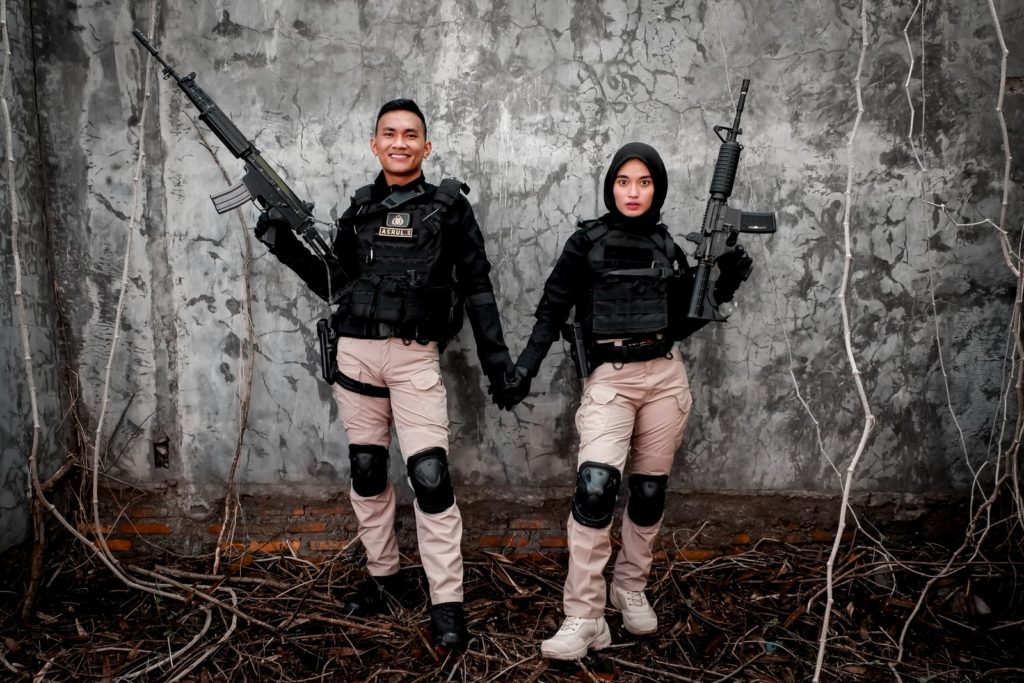 A Moon/Mars conjunction is one of the more potent aspects in a synastry chart.

The Moon is our most feminine placement and represents how we deal with our emotional landscape and sensitive inner core.

It’s one of the most important planets in synastry since it has so much to do with what we seek in a relationship.

Mars is the most masculine planet in our chart. It has to do with our drive and defines our style of pursuing what we want.

Combine these two planets with a powerful aspect like the conjunction, and you can expect fireworks. This aspect creates a primal and primitive reaction that both people feel immediately upon meeting.

Regarding compatibility, Moon conjunct Mars offers a mixed bag, although it is typically considered a challenging aspect.

On the one hand, Moon/Mars can create deliciously passionate and intense feelings between people.

On the other hand, it can be too explosive to handle for some couples and can contribute to an otherwise good connection being short-lived.

In this post, we’ll dive into this conjunction in detail and give you the knowledge and skills to make the best of it.

A couple of things to take note of:

Also, note that the analysis in this post is centered around a romantic relationship. This aspect in friendships or professional relationships expresses itself differently than in a romantic one.

With that said, let’s dive into the five most significant things to know about the Moon conjunct Mars synastry aspect.

1. It creates an intense attraction that binds

There’s usually an instant attraction with this aspect. You can practically feel the heat from their chemistry if you’re near them. It’s something they can feel subtly burning underneath their skin.

When the spark of attraction hits, the Mars person usually feels inflamed with a desire to chase the Moon person. Their pursuit tends to come on strong and is generally welcomed by the Moon person.

Even though the Mars person typically initiates things, the Moon person may feel the dynamic more intensely because Mars touches their emotions in such a penetrating and intimate way with the conjunction.

A lot of complementary yin-yang energy sharing starts to take place once their energies begin to merge.

They feel they can express themselves without judgment because the Moon person is sensitive and understanding.

The Moon person feels desired and sought after in a way that turns them on mainly because the Moon person can’t help but pick up on the sexual appeal and confidence of the Mars person.

The Moon wants to feel safe and cared for, and Mars’s primal protective energy makes them feel sheltered.

While Moon/Mars attracts, it does not guarantee long-term stability. That said, many people underestimate the binding aspect of a Moon/Mars conjunction.

After reading many charts and discussing synastry aspects with other astrologers who’ve done readings for decades, it’s surprising to see how many marriages and multi-decade connections have had a Moon in positive reception with Mars.

2. It creates a strong sexual polarity

Mars conjunct Moon is a highly sexual aspect in synastry. Their physical chemistry tends to be off the roof, even when Moon is the man and Mars is the woman.

Sparks usually fly when they meet, and they might experience a shared animalistic urge to tear each other’s clothes off. It’s a very steamy dynamic.

While both tend to be physically attracted, the Mars person’s sexual attraction is typically more pronounced, leading them to instigate sexual contact.

The moon person can even feel intimidated by Mars at first, yet finds their dominating sexual presence sexy and exciting.

Once familiar, the Moon will find Mars’s presence warm and comforting, even in the heat of passionate sexual contact.

There is a potential that this aspect can create problems around sexuality. Boundaries are essential, especially for the Moon person if the Mars person is overzealous in their lust.

Because their chemistry cranks up so high so quickly, it’s wise for them to portion out their sexual activities.

But, so long as other supportive aspects are present in the chart, Moon conjunct Mars is supportive for long-term sexual intimacy.

Older couples with this aspect tend to maintain a spice to their connection where they get under each other’s skin but in a cute and engaging way.

Moon conjunct Mars in synastry doesn’t just create a casual desire for sex; it puts both people entirely “in heat.”

There’s a strong urge to mate and procreate with this aspect. It can make both crave conception, even if neither had been experiencing a prior appetite for it.

Many astrologers call this “The Baby Maker” aspect due to how passionate their physical responses are. Their libidos inflame each other, making each more fertile in the other’s presence.

This reaction is particularly strong if the Moon person is a woman and the man is Mars. The Moon woman in this role will likely feel an instinctual pull to bear the Mars person’s child, and Mars will have a strong desire to come inside the moon person.

This, of course, might be entirely unconscious and not truly desired at a practical level. However, it will fuel their sexual chemistry, regardless.

If they don’t want kids, contraceptive methods should be employed fastidiously. This aspect can make the woman more fertile and the man more virile.

If they want to have kids together, this is a great aspect to have. They’ll likely be driven to enjoy regular sex together and could easily conceive multiple children.

4. There can be a lot of emotional volatility in their relationship

When Mars and the Moon come together in conjunction, the emotions become inflamed.

They both energize each other emotionally, for better and for worse. The emotional temperature is so hot that it’s readily visible to onlookers.

Moon-Mars aspects are essentially the opposite of Moon-Saturn ones. Moon-Saturn cools things down, slows the responses, and promotes measured reactions.

What makes this dynamic potentially volatile is that the desires of the Mars person can be at odds with the needs of the Moon person. Remember, these planets have entirely different energies.

Minor irritation abounds with Mars-Moon, and there can be a lot of petty arguments that take place regularly. Fights can lead to intense reactions. Think “mountains out of molehills.”

Make-up sex is a common way for these two to navigate their tumultuous emotional dynamic. Though on occasion, one partner (often the Moon person) might refuse to have sex because they are so upset.

On that note, it’s not uncommon for the Mars person’s volatility and forceful nature to cause a lot of angry feelings in the Moon person. This can be especially prevalent when the Moon person represses or tries to intellectualize their emotions.

This domestic volatility can make long-term relationships challenging, especially when Moon and Mars live together.

The rawness of so much instinctual emotion in this synastry aspect can be fantastic for people who enjoy passionate relationships. Still, it’s often too much for others, especially when the pairing lacks other supportive synastry aspects.

5. They can be very productive together

There can be a lot of shared ambition and successes when things flow well in this pairing.

The Mars person will likely help the Moon person to become more assertive under Mars’s protective and reassuring leadership. The Moon person may achieve higher career ambitions as a result.

The Moon person can help soften the harder edges of the Mars person’s expressions. They can also provide domestic comfort to Mars in a way that balances them out.

Tempers must be held in check. This synastry aspect can create a lot of fiery reactivity that may threaten to burn out their connection. They should learn when to pull back from explosive reactions and work calmly through their problems.

Power imbalances should be addressed. Both planets like to be assertive about their points of view, and the Mars person should watch out not to steamroll the Moon person and overly dominate every discourse. The aggressive nature of mars can easily hurt the sensitive emotions of the Moon person.

Emotional triggers should be understood. If the Mars person does things that hurt the Moon person, either by actions or words, they should try to learn why it’s happening. If they neglect this, then the Moon’s needs could feel trampled by Mars, and the relationship could turn sour.

Other supportive synastry aspects might hold the key to long-term success. Moon and Mars together are very volatile. This is especially true when either or both planets aren’t well supported in the individual(s) charts.

When this happens, other positive aspects are often needed in the synastry chart if they want to find success together. Soothing commitment aspects from venus, Sun, the Moon, and stability aspects from Saturn can be highly beneficial.

This aspect indicates strong physical and sexual attraction but also high emotional volatility and no guarantee of stability. It’s great for sex but bad for hurt feelings.

At its best, the Moon person calms and supports the Mars person at the right times and brings out enough tenderness and affection from Mars to make everyone feel supported.

When balanced, the heat from this aspect pumps endless polarity-driven excitement into the relationship.

Heavily fire sign people might find this aspect to be just right, while watery and earthy people might feel that Moon-Mars is too spicy for a sustained connection.

If you’re up for the challenge and prepared for exciting debates and occasional hurt feelings, this aspect can bring a ton of spice and excitement to life.

It’s an aspect that can create a power couple that motivates and inspires each other’s emotional expression and entrepreneurial growth.

If you share this aspect with a lover, just remember to assess it within the context of the rest of your individual charts, your synastry, and ideally, composite chart. This will give you the larger picture that astrology is capable of providing.