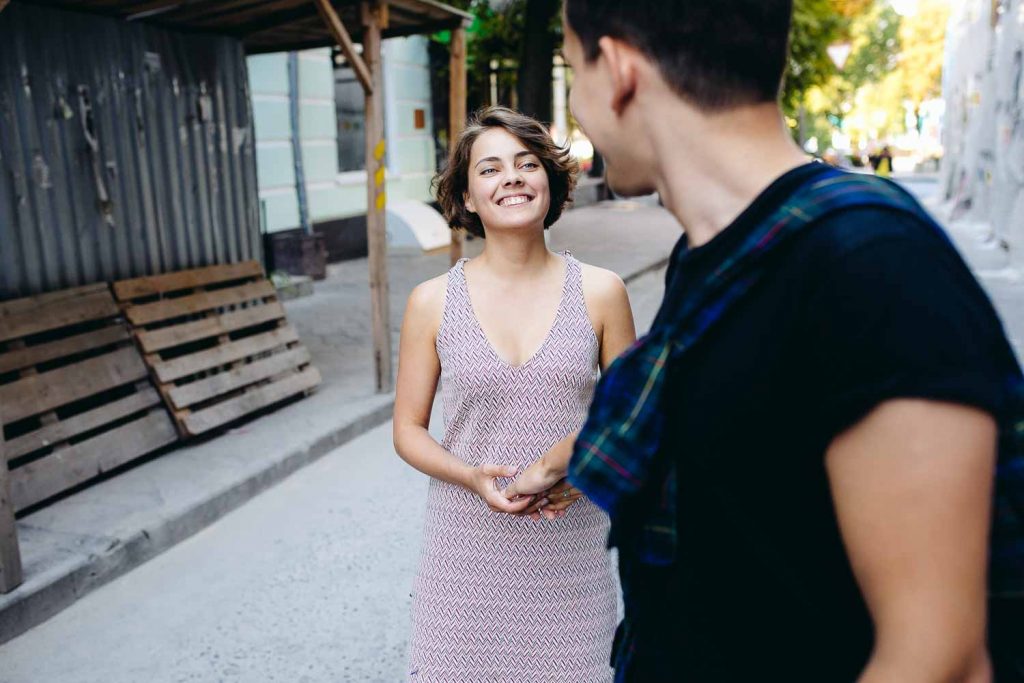 Leo is a complex, flirtatious fire sign. These men tend to play the field and can be a little hot and cold when they’re attracted to a woman.

Ideally, your Leo interest would confidently and directly declare his attraction for you if you’ve drawn his favor. Some Leo guys do this, but most will take their time. Leo is courageous but also sensitive to rejection. He’ll likely want to test the waters first to see how warm you are to him.

In this article, you’re going to discover the exact signs a Leo man displays when he’s into someone.

Now roll up your sleeves, let’s get into it!

Leo men have an intense, fiery gaze. You can see his soul in his eyes, as well as his longing for you.

Eye contact is a consistent sign of attraction, and Leo men know it. When they like you they will have a hard time keeping their eyes off of you. They will linger on you, waiting for you to glance their way. If you look his way and he makes direct eye contact with you, holding it until you look away, that means you’ve caught his interest and he’s trying to catch your attention with a dominant frame.

So check out what his eyes are doing when he’s around you. Can you spot him checking you out? Is he looking your way to see if you’re enjoying yourself? If you’re in a group together, is he looking to meet eyes with you when something funny/entertaining happens? All signs that he’s into you.

2. He gives you tons of attention and compliments you freely

Leo’s men understand that attention is a potent currency. They know how to draw attention to themselves, and know the power of giving it to another.

When a Leo guy likes you, he will be sure to go out of his way to make sure you feel warm and desirable. He’ll praise you and lavish you with admiration. He’ll also be sure you know how impressed he is by the things you say and do. You’ll probably notice all the extra attention if you’re on the lookout for it.

Here are some additional ways your Leo guy may lavish attention on you:

If he’s giving you regular attention and affirmation, check to see how deep his complimentary comments are. Is he fixated purely on your appearance? Or is he going deeper and praising your character traits and qualities? The deeper he dives into your personality traits, the more likely it is that he’s into you.

Related: 10 Things to Know about the Leo Man in Bed

3. He shows off and dramatizes his actions around you

Leo men are proud and have an incredible flair for dramatics. They’re showmen at heart and love it when the attention is on them.

He values the spotlight in all aspects of life. And this certainly holds true when he’s into a woman and wants to catch her attention.

If he likes you, he’ll talk louder in your presence, tell his best jokes, show off his skills in all areas, and overall make sure that you’re witnessing the most dramatic and elegant side of his personality.

Related: 4 Essential Tips to Make a Leo Man Miss You

A Leo man who’s attracted to you will be sure that his body language and expressions are open and inviting to you.

How do you know when a Leo guy’s body language is sending attraction signals? Here’s what to look for:

He’s constantly smiling at you when he sees you. No forced smiles either. He makes sure to show you a wide, genuine, full-toothed smile. If he’s glancing over at you and smiling for no apparent reason, that means you’ve got him hooked.

He’s making sure that his body is directed at you and open energetically. We naturally turn our bodies towards what interests us. When a Leo man likes you, he’ll point his body your way. He’ll face you with his torso, arms, legs, feet, etc.

He mirrors and mimics your movements. When a Leo man likes you he’ll be highly receptive to your body language and will shadow the movements that you make. If you move your arm, he’ll move his. If you touch your face, he’ll do the same. Etc, etc. He’s also likely to match your pace when you’re walking together.

He gets close to you physically. He might sit or stand right next to you when space would allow him to be further.

Tip: If you’re pretty sure that he likes you, test his response when you mention that you’re interested in or going on a date with another guy. If he likes you, his body language and expression will react. He’ll likely look upset, even if just for a second before he recovers.

5. He’s respectful and shows genuine interest in you as a person

These men are sometimes known to be self-absorbed and mostly focused on their own life, but a Leo man who genuinely likes you will want to understand you thoroughly.

He will use your name a lot, ask a lot of questions about you, remember the details of what you share, stay off of his phone when he’s talking to you, and overall give you his undivided attention. He will also likely confide in you emotionally.

This separates him from the men who are just interested in you for sex. Those guys won’t bother to take the time to get to know you.

Related: Why are Leo People So Attractive?

6. He goes out of his way to touch you

Leo men are big on physical affection. A light touch on your hand or shoulder can mean the difference between friendly and flirty, so pay attention.

If he’s making an effort to touch you, that’s a likely sign that he’s crushing on you. Here are some ways he might touch you:

Any physical contact like what’s listed above is a strong sign that your Leo man is into you. These guys won’t touch a woman that they dislike and tend to avoid physically escalating a friendship for fear of giving off the wrong impression.

If you’re curious, touch him and see his response. If he reciprocates or flinches, that’s a sign that you have an effect on him.

Related: What Sign is the Best Match for Leo?

Leo guys are highly expressive and love to surround themselves with large and eclectic groups of friends. If he likes you, he’ll quickly bring you into his social sphere and even will work to get you on your own with him.

Leo tends to fall hard. So he’ll want you around him a lot if he’s into you and will include you in his day-to-day plans. He’ll also reach out a lot via texting or phone calls when he’s not around you. He’s not afraid to initiate contact like this.

He wants to show his value as well, so he’ll likely offer to help you with any tasks or projects you have going on. He’ll want to be involved and show off how much he can support you.

8. He’s getting possessive or jealousy

Leo men are fiery and prone to jealousy. They’re often possessive of their partners and want to receive the bulk of their affectionate energy.

So watch to see if your Leo man is paying close attention when you talk to other guys. Is he reacting by getting closer to you or subtly discouraging the other guy from connecting with you?

This might be playing with fire, but you can certainly test if he has a jealous response over you. Try flirting with another guy when he’s around. Or mention that you might be going on a date with a guy soon. Pay close attention to his reaction, especially in the initial moments of his response.

9. He treats you differently than other women

This is the most important thing to pay attention to when determining if a Leo man likes you or not.

He might be displaying some of the signs of attraction I mentioned in this post. But does he also behave these ways with the other women in his social sphere. Some Leo men are incredibly flirtatious by nature and what you see as signs that he’s into might just be his friendship style.

To check, look for these things:

There you have it, nine ways a Leo man signals his attraction for a woman! Good luck out there 😉