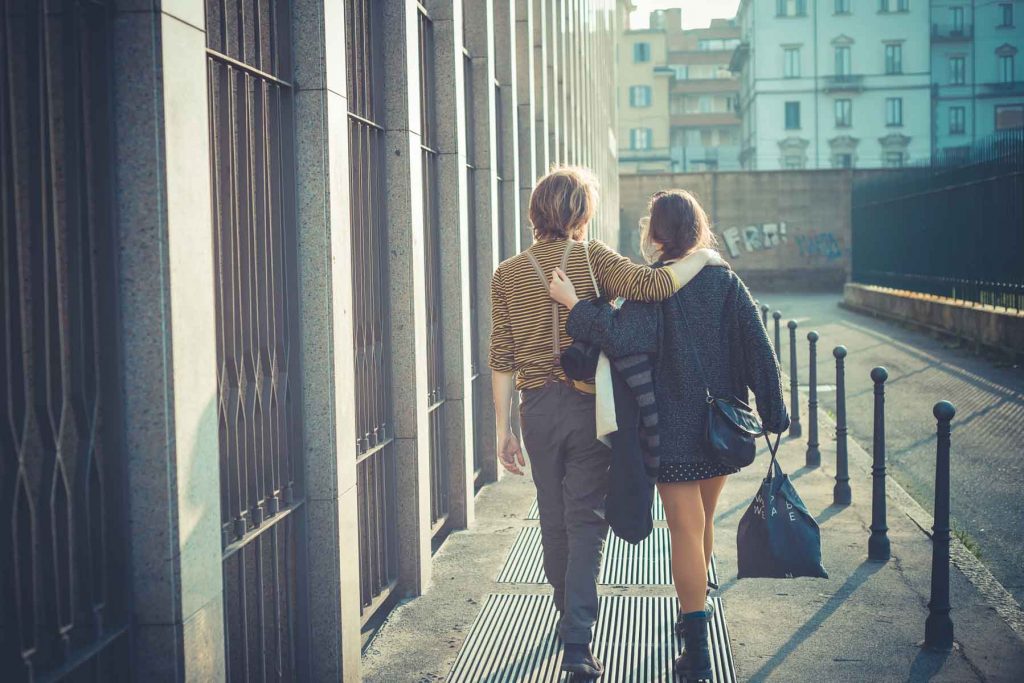 Crushes are fun. Crushing on a water sign, like Cancer, can be a totally wild and enveloping experience.

These guys are super emotional and one of the easier signs to read when they’re starting to build attraction.

Looking for signs that your Cancer man has feelings for you? If he truly likes you, you’ll know by the end of this article.

Even if he’s only slightly into you, you can bet that he’ll be behaving in the following ways.

Related: 5 Ways to Get a Cancer Man to Chase You

1. He works hard to establish an emotional connection with you

When a Cancer man starts to feel a spark of interest in you he’ll immediately work to develop an emotional rapport with you.

He will want to establish a connection, empathy, and mutual understanding with you. He’ll hang onto your every word and ask deliberate questions to try to figure you out. He’ll invite you to vent about ex-partners, and listen closely as you do.

He’ll use his body language to send non-verbal cues that he’s open to you. He might give you lots of eye contact, supportive nods, move closer to you or open up his torso to you.

You can test this by opening up your body language to him and seeing if he further reciprocates (high interest) or pulls away (lack of interest).

In conversation, he’ll listen to you very closely. He’ll ask you a lot of questions and will listen closely and remember details, as he wants to get a glimpse into your life.

He’ll typically ask more about you than you usually volunteer. He’s a water sign, and they tend to want to know a lot about you. He’ll reciprocate by confiding in you about his life, too.

It’s important to note that even though he’s warm and amiable with someone he’s interested in, he doesn’t open up to everyone this easily. Cancers are very sensitive inside so they tend to keep up a hard, protective barrier (like the crab, their zodiac symbol).

So if he’s showing you these signs, it means he’s into you.

2. He finds little excuses to touch you

A Cancer man who’s interested in you will look for reasons to touch you more.

Has he been reaching out to grab your hand, or playfully touching your shoulder? Maybe he’s been pulling you close and initiating long hugs when you meet up and when you part. He’s maybe starting to put his arm around you or playfully tease you like you’re his little sister.

Again, you can test his comfort and interest in you by getting closer to him yourself. Get a little physical with him – tease him physically, brush your body against his at opportune moments, offer to give him a hand or shoulder massage.

If he does pull back, it’s trickier to assess what the reason is, but try to pay close attention to see if he’s actually shy or just not into you!

Related: 5 Simple Ways to Make a Cancer Man Miss You

3. He makes an effort to spend a lot of time with you

A Cancer man who’s into you will want to spend plenty of time with you. He’ll work to enmesh himself into your life and schedule.

If he’s texting, calling, or making plans to meet up more than you, you can bet that he’s into you. He might call you to see how you’re doing, just as a checkup to make sure you’re doing good.

An interested Cancer guy may also show up at places you frequent. If you’re having multiple unexpected meetups with him – there’s probably less chance involved than you thought.

Related: How to Build a Cancer Man’s Attraction through Text

4. He flirts with you on a consistent basis.

If he’s putting himself in your orbit a lot and placing a lot of playful attention on you, he probably likes you.

His flirting style also consists of deep, emotional conversations. If he’s totally glued to you and asking questions about your life that go as far back as your childhood, then he’s into you.

Another flirtatious move of his is to pick up the tab for lunch or to gift you flowers and other sentimental items. He doesn’t spend money flippantly, so it’s a big sign he’s favoring you. Be sure to show your appreciation!

Cancers are often considered to be clingy partners. And it’s true. Cancers are highly sentimental and grow attached to the important people in their lives.

If you’ve started to become an important figure in his life, he might start to obsess over you and try hard to keep you by his side. He might become really expressive, sweet, and romantic partially because he likes you, and partially to keep you wanting to stay close to him.

If he’s been being physically flirtatious at all, he probably won’t hold back if you’re around a lot of people. He might catch you by surprise by starting to latch himself to your hip in public and remaining close to you.

He may even ask your friends about you behind your back. He likes to keep tabs on you to combat his fears of rejection.

6. He gets a little possessive

Yes, he can get possessive in the crush stage, even before the love stage. Cancer men are just like that sometimes.

As I mentioned concerning his clingy tendencies, this guy grows fond of partners (and potential partners) and quickly feels anxious about potentially losing them. He can be addictive and obsessive with crushes.

You might catch a glimpse of his possessiveness if you find yourself around him and another guy. If he really likes you, he’s bound to have a reaction – especially if the other guy seems to be getting close to you. He might get sarcastic, rude, start to ignore you, or in some other way display an unsettling reaction.

Related: 7 Blatant Signs a Cancer Man Might be Using You

If could happen after the fact, too. Maybe you were out with friends, and afterward, he begins acting a little strange with you. Reflect back and consider if another guy was giving you attention.

Beyond jealousy, his possessiveness can show up in other ways. He can be checking on you frequently when you’re out to make sure you’re safe. He can inquire with who you’re spending your time with and make character judgments about them.

If he seems to be acting jealous or possessive, it’s a good opportunity to ask him about his feelings for you. Feel free to let him know that it seems like he’s viewing you as more than a friend by how he’s acting.

Related: Why are Cancer People So Good in Bed?

7. He shows signs of being emotionally reactive towards you

The Cancer man, being ruled by the moon, is a moody fellow. He can be prone to mood swings. Up one minute, down the next.

If he likes you, that means his emotions are invested in you. As a result, you could become the occasional subject of his mood swings.

You could see his sensitivity in action if he reacts to something you either did or said or as a result of something that happened to you.

He might try to enthusiastically soothe you when you become stressed out, coming to your side and taking care of your needs, – emotional or otherwise.

And if you do something that triggers his stress response, he could become moody or passive-aggressive with you.

Related: Why are Cancer People So Attractive?

8. He voluntarily discusses his future and includes you in it

Cancers are family-oriented sentimentalists. In the back of his mind, he’s always envisioning a future that includes a cozy dwelling and nurturing family arrangement.

If he’s not into you, he won’t discuss much of his or your future. But if he has a crush on you, he’ll talk about far-off plans. Both his and yours and perhaps a scenario where you’re both involved!

I’m not saying he’ll start talking like you two are going to get married (even though he might be trying to hint at that). It’ll be more along the lines of mentioning restaurants that he might want to show you in the future, travel destinations that he could see you both sharing a good time at, etc.

9. He starts inviting you over to his place a lot

Cancers love their homes. He loves being at home, cooking, caring for his friends, family, and likely has pets.

If he’s been hosting you at his home, it certainly means you mean something to him. His home is his safe zone. His oasis of comfort. He’d only bring you there if he was really comfortable with you.

If he likes you, don’t be surprised if he asks you to come over for some home cooking. Your night could quickly progress into that escalated physical touch that I mentioned before.

If he really likes you, expect him to invite you over when his family is visiting. This means you’re being put through his deeper romantic tests. Make sure to create a good impression on them, especially his mom!

Related: What Sign is the Best Match for Cancer?

So, has your Cancer guy been showing you these signs?

What are some other ways that you’ve found that Cancer men show their interest?

Let us know below:)