8 Clear Signs That an Aries Man Likes You (Is He Interested?) 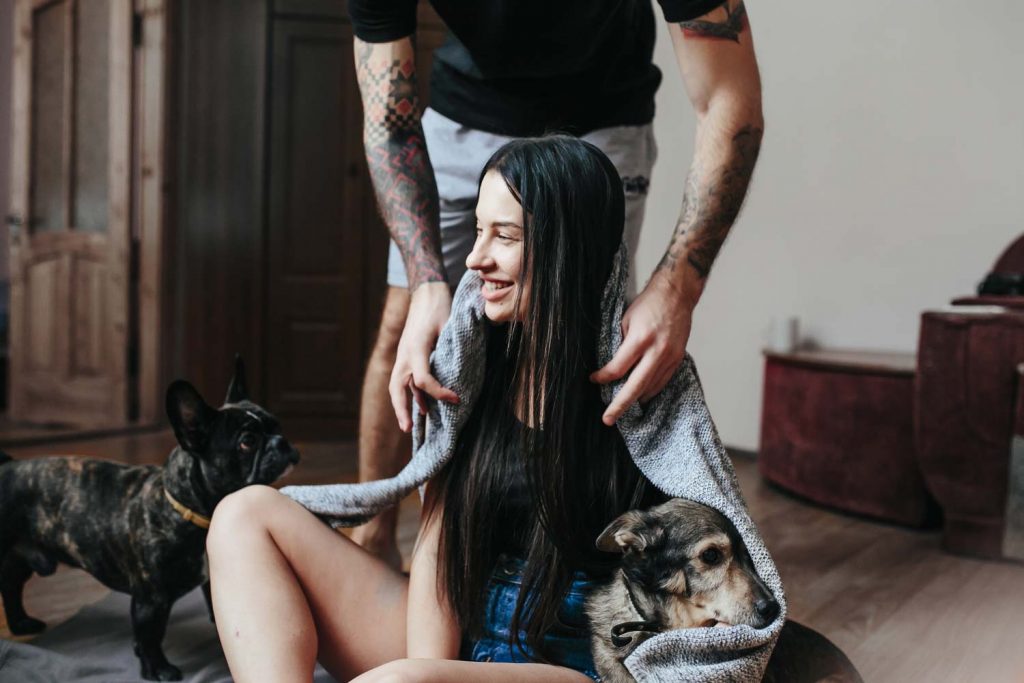 Aries guys are flirty and direct but can also be more sensitive than they let on. So reading their interest can be harder than you’d think at first glance. Sometimes they hide how much they care for a woman due to a fear of getting hurt.

It can be doubly hard to read Aries men because they tend to flirt with a lot of people in their day-to-day life. Is he crushing on you? Or he’s simply riding his normal flirtatious vibe. It can be hard to tell.

All good though, because this article will give you the key insights you need to understand how this guy’s mind works and how he acts when he’s got a big ol’ crush.

Aries men are aggressive and direct. One of the best indicators of his feisty attraction is his eyes. Eyes are the window to the soul, and when Aries’s soul is on fire for someone, his eyes will intensely bore into that person.

When he likes you his eyes will linger on you. He will glance at you constantly when you’re not looking. If your eyes meet, he’ll likely react by sustaining prolonged eye contact with you. You’ll feel the intensity of his look and might be a little taken aback.

To test his attraction for you, lock eyes with him or catch him sneaking glances your way. If he reacts strongly to your looks, it means you definitely affect him.

If you’re hanging out with him, check to see if he keeps glancing at you to see if you’re enjoying yourself. If he does, it’s a big clue that you matter to him.

If you’re in a group together, and something funny or eventful happens, notice if he’s the first (or one of the first) people that he looks at to share a reaction with. This would be another clear sign of his interest.

2. He goes out of his way to compliment you

Aries guys usually take the straightforward approach with dating and will lay compliments on a woman in a clear and direct way to make themselves known to her.

His compliments will usually feel genuine. He’s not a big game player and simply wants you to feel good so he looks good. If he likes you, he’ll be sure to give you a few prominent compliments. He’ll most likely start by complimenting your appearance. These guys are generally fit and body-conscious, so this makes sense. He might compliment your clothes, your body, your eyes, or other notable features you possess.

As time progresses, he’ll begin to compliment your humor, your personality, and any skills you’ve put any on display for him. He loves competent partners.

If he’s giving you sincerely heartfelt compliments that go beyond your physical looks, then you’ve definitely caught his attention!

Aries men are impulsive and playful flirts. Most men outgrow schoolyard teasing styles, but the Aries guy will typically engage in it shamelessly with a woman he’s in pursuit of.

He won’t bully or pick on you in a rude way (unless he’s an asshole or insecure). His teasing is direct but flirtatious. Think like a sibling rivalry.

He’ll playfully taunt you, ridicule you, and encourage you to fight back and make it a game. If there’s a habit you have that he thinks is odd or silly, he’ll make sure you know it. It can actually be a breath of fresh air to have a man tease you instead of immediately falling at your feet and expressing his love.

If your Aries guy has been teasing you, definitely return the favor! Engage in a good debate. Call him out. See how things escalate. If he’s into you, he’ll engage fully and tensions should escalate (in a good way). Just be sure to remain playful, have a light touch, and laugh a lot.

So you’re teasing each other and getting on well. If he likes you, he’ll start to escalate things with you physically. Physical expression is very significant for Aries. He’s visceral, action-oriented, and physically inspired.

He might start with light touches. Perhaps he’ll sit or stand close to you and press his body into yours. He might rest his hand on your shoulder or on the small of your back. Maybe he’ll brush his hand against yours. He’ll do all of this “by accident” or will find a simple excuse.

As your physical connection grows, he might offer to give you a massage or engage you in play fighting, arm wrestling, or full-on playful wrestling.

You can always test his physical desire for you by getting physical with him yourself. If reacts enthusiastically, he likes you. Even if he flinches or pulls back – if it’s quick and intense, that means you’re having an effect on him.

5. He wants to be by your side regularly

Aries men tend to move fast in courtship. If he doesn’t simply straight-up tell you that he’s into you, he’ll make sure to show you by including you in his plans. Spending abundant time together speeds up the process of increasing familiarity and growing attraction.

You’ll know he’s thinking of you because he gives you plenty of opportunities to meet up with him and be involved with his life. Aries men are highly active and keep busy schedules.

He might invite you to social gatherings, sporting events, family gatherings, or outdoor adventures.

It’s likely that he’ll invite you to something involving a lot of physical exertion. Your typical Aries man is fit and wants a fitness-minded partner. He might test your resolve by taking you on an extreme sports binge or a long hike.

An Aries man with feelings for you might also work to involve himself in your life and routine. He’ll offer to help with anything you need, especially physical things that allow him to display his strength and endurance. Moving to a new apartment? If an Aries man is crushing on you, he might want to handle the whole job of moving by himself!

6. He shows off in front of you

Aries men are bold, masculine, and love to show off their skills. And he doubles down on this tendency when he’s crushing on someone. He enjoys working for the affection of the person he’s into.

If you notice that he’s making clear efforts to display his strength, resolve, and talents in front of you, then he’s definitely hooked on the idea of impressing you.

He might perform some dangerous stunts or humble brag about some of his past achievements. You’ll probably be impressed – if not for his actual display, at least because he’s putting on such a show.

7. He becomes self-conscious or indecisive around you

Yes, Aries represents the prototypical masculine fire sign energy that’s out to dominate the world around him. But many of these men are quite sensitive, and fear being seen as weak compared to the image of strength they so strongly portray to the people around them.

Sometimes an Aries man with a huge crush on you will go against his usual self-assured confidence, instead, approaching indirectly and perhaps becoming shy or tongue-tied. Conversely, he could be harsh and rude, which comes from the same place of insecurity. He may even start to avoid you after coming on strong initially.

If he has such strong reactions, it probably means he likes you but is scared of rejection. So try giving him plenty of approval and choosing signals, which should allow him to warm up and become a confident flirt.

8. He displays signs of jealousy or possessiveness

Aries men are competitive and highly territorial of the people they care about. If he’s into you he might start to subtly dominate your energy in group settings. He could “box” other guys out from you with his body language, or simply with his energy.

A good test to see if he’s attracted to you is to flirt with a man near him. If an Aries man likes you, rest assured that he will absolutely have a reaction! It might be quick and he recovers from it within a few seconds, but it will be there. So be sure to check. Look for an expression on his face that’s a combination of despair and competitive anger.

If your Aries man is displaying at least a few of the seven signals above, there’s a strong chance that he’s into you. If you’re dying to know for sure, just ask him. Boldness in a woman is a huge turn-on for the Aries man.

The worst case is that he’s not into you, but I assure you that asking him if he’s into you or wants to go out won’t be a huge deal. You might end up a little hurt, but you could end up great friends!