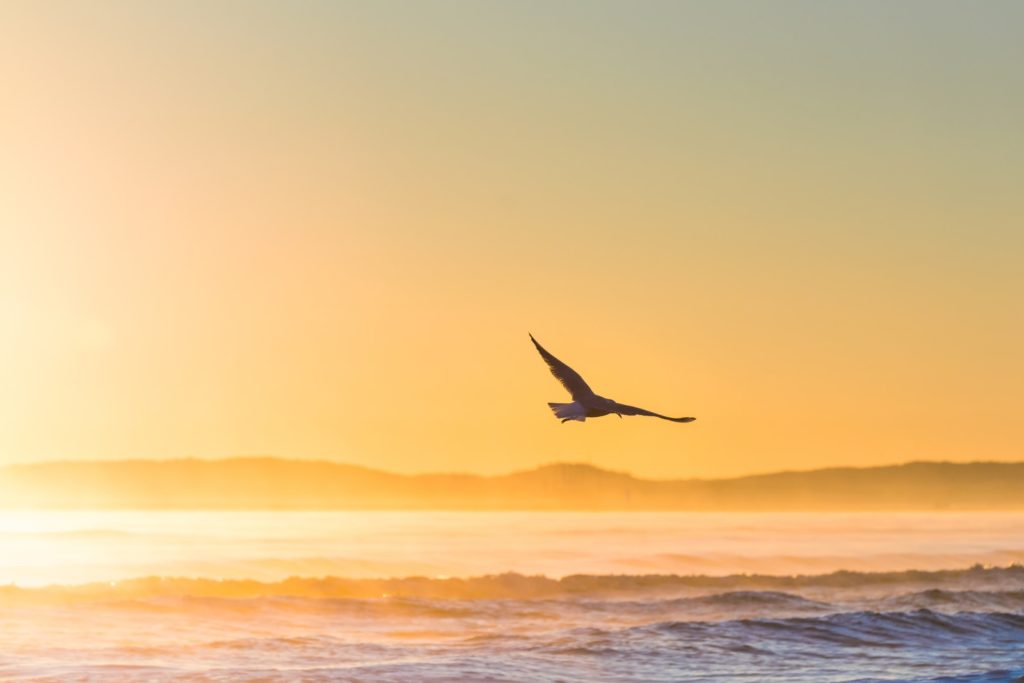 Transformation is built into Scorpio’s base symbology, and each stage of its transformational process is represented by an animal.

Because of this, Scorpio’s spirit animals are some of the most fun (and interesting) out of the twelve signs.

Read on to learn all about Scorpio’s in-depth spirit animal associations.

By the end of the article, you’ll have a much deeper understanding of this complex sign than you had when you got here. 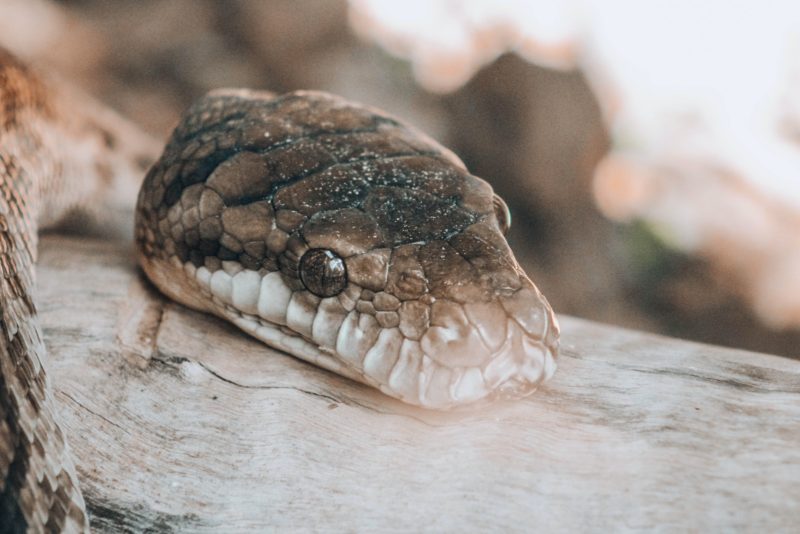 The snake is an animal that’s commonly associated with Scorpio energy. Both are seen as universal symbols of renewal, rebirth, and regeneration

Here are some of the main similarities we can draw between snakes and Scorpios, which lend to their spirit-level connection.

Subtlety. Like Scorpio, the serpent tends to be shy and likes to lay low. Usually solitary, both snakes and Scorpios will be still and patiently waiting for opportunities to present themselves.

Both prefer spaces that are out of the usual hustle and bustle of the world. Snakes live in the hidden areas of denser terrain, while Scorpios often feel their best hidden away at home.

Fierce defensiveness. While Scorpio and serpents both like to keep to themselves, they are deadly when threatened. There’s a ton of violent, penetrative potential in their bite. They each fight with tremendous vigor when they or their close ones are threatened.

Regenerative force. While Scorpio people are constantly rebirthing their personality and shedding the skin of their old one, the snake is literally shedding its skin to don a new one.

While the snake’s regenerative process is much more visible than Scorpio’s, that doesn’t mean that Scorpio’s new skin that emerges isn’t any less transformative.

Misunderstood. Like the snake, Scorpios are frequently seen as dangerous and untrustworthy.

While you do have to watch out for both, as being on the other side of their venomous wrath can be deadly, they also both carry a calm and poised energy with potent alchemical potential.

You just have to accept their enigmatic dark side if you want to tap into it. 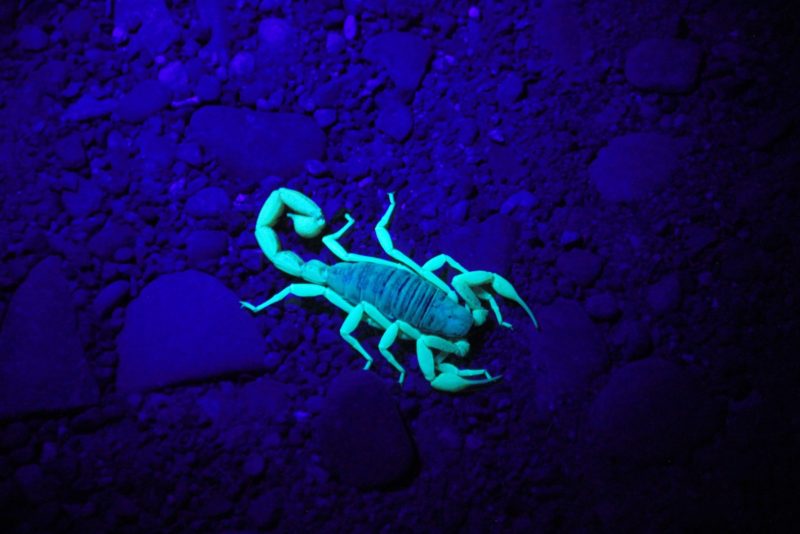 Next, we have the Scorpion, which is, of course, the main animal symbol that we associate with the sign of Scorpio.

Here are some of the most prominent traits that the Scorpion and the Scorpio share.

Survival-mindedness. This is perhaps the most defining trait that these two share. Like Scorpio, the Scorpion is an animal that’s constantly tuned into its surroundings and is always on the lookout for potential threats.

They’re aggressive, very self-protective, and always ready to strike out with their potently venomous tail. Scorpio may not be equipped with literal weapons on its body, but Scorpio people instinctively know how to react to survival threats like no other sign.

Adaptability. Scorpions are one of the oldest, if not the oldest, terrestrial animals to walk the planet. They know how to survive and are hardy enough to survive even the radioactive fallout from a nuclear blast. Scorpios, too, learn how to adapt to their circumstances and environment in an uncanny way. In a typical survival scenario, never count out a Scorpio’s ability to be the last one standing.

Their patience is unmatched, just like the patient scorpion that waits out its prey.

High alchemical potential. Scorpions may be considered more lowly animals, but this doesn’t come from a lack of energy and intensity. There’s something special to these creatures – just watch how they glow under black lights.

The trouble with scorpions is that they’re developmentally locked into heightened survival modes. Their anger and destructive nature intimidate but also stunts more profound growth.

The Scorpio human, on the other hand, has the power to transform their raw, dark energies via a powerful transformational process. One that is more clearly represented by the next signs on this list. 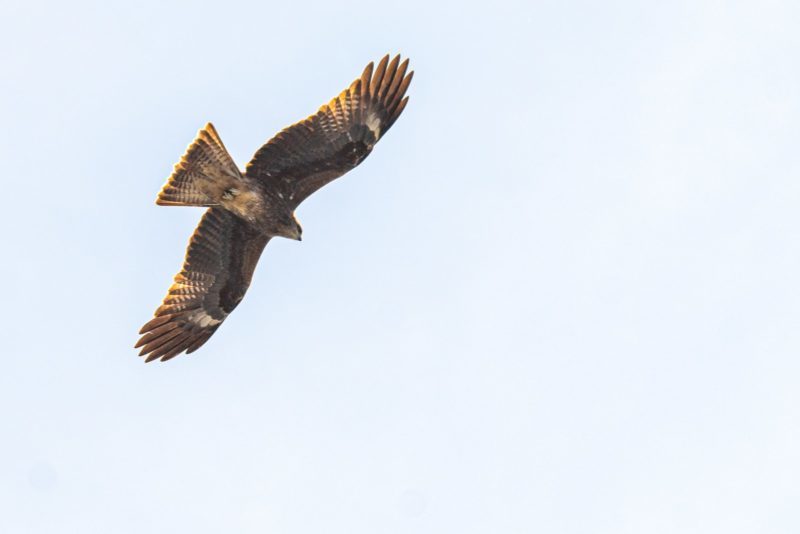 Next up on Scorpio’s evolutionary spirit animal totem pole is the notorious and ever-powerful eagle.

Here are some shared traits that firmly place the eagle as one of Scorpio’s most iconic spirit animals:

Elevated perception. Just like the scorpion, the eagle shares an ability to land deadly strikes at a moment’s notice. The main difference is the vantage point. Like a highly evolved Scorpio, the eagle isn’t trapped in a constant state of hypervigilance like the ground-dwelling scorpion.

The eagle can soar well above the terrain and assess the overall picture quickly. In the same way, a heightened Scorpio mind can detach from reactive mode and gain access to powerful perceptive abilities. With this, they can develop true wisdom and intuition.

Fearlessness. As a spirit animal for Scorpio, the eagle displays some of the highest traits of the sign. Like the eagle, Scorpio uses its tenaciousness and penetrative focus to achieve its goals. While an unevolved Scorpio can be full of fear, evolved Scorpios are some of the most unafraid and courageous humans you can meet.

Loyalty and nurturing ability. Like Scorpio, eagles take their bonds seriously. They nurture their young with calm assertiveness and protective instinct. They mate for life and maintain a high-minded approach to navigating relationships.

Related: Why are Scorpios So Hot? 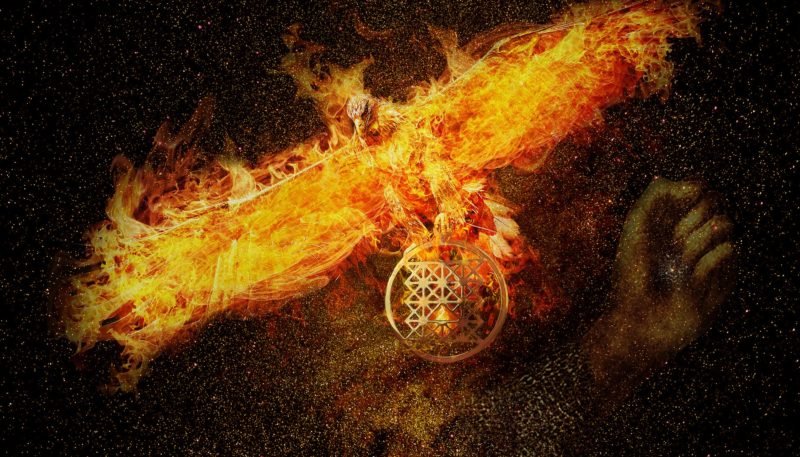 While the eagle is a seductively appealing spirit animal in itself, eagles are still bound by some shortcomings. They can suffer from pride, arrogance, manipulation, and misusing power for prestige.

This leads us to the pinnacle spirit animal for Scorpio – the phoenix. This is a mythical bird that, once dead, is burned and is then reborn from the ashes to begin a new life.

With the Pheonix, we are reaching the endgame of Scorpio’s true potential as a spiritual being.

Here are the associations between the phoenix and the evolved Scorpio being:

Utter transformation. The phoenix rises from the ashes. It is associated with dawn, daybreak, and daytime in general. The Scorpio, on the other hand, is usually associated with nighttime and things that are hidden.

A phoenix-bound Scorpio, then, has fully transformed from the dark into the light. Through challenge, pain, and emotional intensity, Scorpio moves on from its self-destructive tendencies and soars triumphantly out of the ashes.

It is the fullest expression of Scorpio’s ruling planets – Mars and Scorpio. The martian ideal is to fight through death, and the Plutonic ideal is to evolve and be reborn.

Deep, trans-human wisdom. A Scorpio who approached their evolutionary task in earnest reaches heights of wisdom that are unusual for humankind. The regenerative powers of an evolved Scorpio match the mythical expression of the unbound phoenix.

There’s an unmistakable inner strength that radiates and, unlike the prior states of Scorpio’s evolution, lays completely vulnerable and unguarded. An evolved Scorpio no longer fears hurt.

Power to heal and renew others. With this deep healing done from the inside out, the phoenix-level Scorpio is now able to turn its powerful healing light outward.

Life is fully spiritualized, leaving previously tempting emotions like revenge and pettiness by the wayside. Scorpio is now free to tap into its inner light and embrace its authentic powers of love and healing.

There you have it, the spirit animals associated with Scorpio, encapsulated by its potent alchemical process as the zodiac’s most powerfully transformative sign.

What Scorpio spirit animal speaks to you the most? Do you know of a Scorpio who has moved to higher manifestations of the sign? Let us know your thoughts in the comment section below.